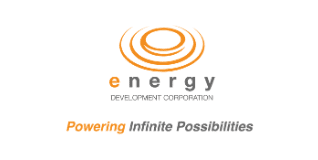 Energy Development Corporation, through its CSR initiatives, creates a positive impact on the people and environment while also manufacturing long lasting partnerships

“The Energy to go further”

Energy Development Corporation (EDC) was established on 5 March 1976 in the Philippines. It is the largest 100 percent renewable energy (RE) company in the country. It generates over 42 percent of the country’s RE capacity and accounts for more than 20 percent of its total installed RE capacity with over 1,400MW of renewable energy in its portfolio. The company is comprised primarily of geothermal power facilities, as well as wind, solar energy and hydroelectric power assets. Its goal is to encourage national development by providing clean, renewable, reliable energy.

The watersheds that the corporation manages encompasses about one percent of the country’s total land area. The watershed absorbs close to five times the amount of carbon as compared to the company’s carbon emissions annually. Energy Development Corporation achieves this through its BINHI forest restoration program with the help of the farmers’ associations in its areas of operation in the Philippines. The corporation gives incentives to the farmers in the associations.

Energy Development Corporation embeds Corporate Social Responsibility in its operations. The company’s initiatives have evolved over the years in order to be more responsive to the needs of the local communities and the challenges of the changing environment. The company believes that through its CSR initiatives, it can create a positive impact on the people and environment while also manufacturing long lasting partnerships.

Geothermal energy, the primary source of EDC’s business, relies heavily on lush forests to sustain its reservoir. This means that comprehensive watershed management is crucial to its operations. With the help of the green innovator’s partner communities, slash and burn farmers have been transformed into forest stewards though the BINHI program.

BINHI is EDC’s 11-year old forest restoration program which has been combatting issues related to deforestation. The corporation maintains its BINHI areas with the help of its partners from different sectors. Currently, the renewable energy champion has 177 partners who help grow its 96 premium flagship species.

The company’s employees volunteer for its tree planting activities and tree planting activities on BINHI day and Arbor day which coincides annually on the month of June. The head office and all the renewable energy sites have their own BINHI celebrations. These celebrations include talks on biodiversity and climate change. EDC empowers its 43 communities through various education and livelihood programs to help them grow in pace with the company. To make it sustainable, the corporation invests in programs that are either aligned with its core business or have been proven to uplift the lives of the residents in its partner communities.

The Baslay Coffee Program is one of EDC’s most successful CSR initiatives. It serves as a model among farming communities across the company’s various sites and even for other areas in the country that have similar economic, socio-cultural, and environmental issues. The Baslay Farmers’ Association (BFA) is one of the first farmers’ groups in Negros Oriental. It produces premium quality organic coffee recognized by internationally trained baristas in the Philippines. To date, the BFA has 123 members composed of first-generation slash and burn (kaingin) farmers as well as second generation farmers. The organization communally owns and operates 220 hectares of organic coffee forest plantations situated at the foothills of Mt. Talinis, which yields 80 percent Robusta and 20 percent Arabica beans.

The endemic wildlife in the area has been restored and preserved. As evidence, 113 species of birds have been identified to be thriving in the Baslay forests. Most importantly, the former kaingin farmers are now experts in interplanting coffee produce with native tree species such as Balante, Ulayan, Balete, Malagapas and Bakan.

“Energy Development Corporation, through its CSR initiatives, creates a positive impact on the people and environment while also manufacturing long lasting partnerships”

“With the help of Energy Development Corporation, slash and burn farmers have been transformed into forest stewards though the conglomerate’s BINHI program, thus helping to preserve rainforests”