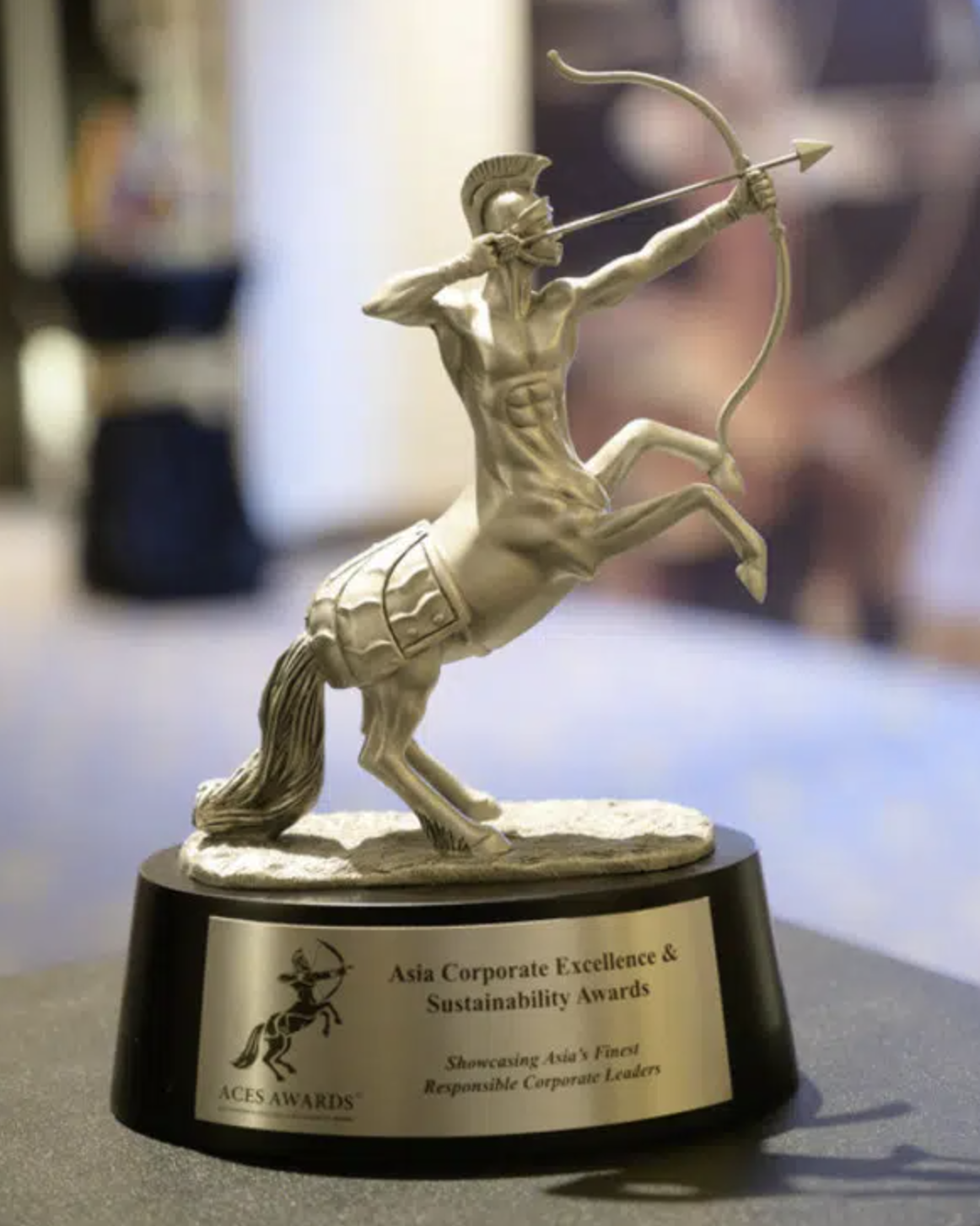 KUALA LUMPUR, Malaysia, Nov. 22, 2021 /PRNewswire/ — As the world gradually turns the tide on the severe global recession and aftermath brought forth by the COVID-19 pandemic, the companies that have prospered despite the dismal times have become illustriously evident.

And in honouring the ingenious innovation, capabilities and resilience of these industry trailblazers, the Asia Corporate Excellence and Sustainability Awards (ACES) has specially handpicked the creme de la creme of these corporations as rightful award recipients for its 2021 edition.

“In line with everything ACES symbolises, we are exceptionally proud of our list of nominees and winners this year as they have ultimately emerged triumphant and made a pronounced difference through bold and unorthodox management strategies amidst seemingly insurmountable challenges in the thick of unprecedented adversity,” says Shanggari B, Chief Executive Officer of MORS Group.

MORS Group is the corporate think tank behind the ACES Awards, composed of a group of leaders from diverse backgrounds whose mission is to support eminent corporate leaders by sharing a platform to exhibit leadership and sustainability excellence, to learn from market experts, to engage stakeholders in valuable ways, and to embrace a culture of progressive learning through a series of comprehensive programs organised across Asia.

The ACES Awards acknowledges successful corporations and business leaders in Asia across 2 key domains: leadership and corporate social responsibility, and acknowledges their achievements in consideration of their contributions towards sustainable and exemplary impacts made within their communities, industries, and the immediate world.

Aside from these prestigious recognitions, the ACES extends a platform for these companies and their respective leaders to build rapport with one another and exchange ideas on best practices in order to drive sustainable business growth across Asia. Those fortunate enough to be a part of this elite group share a common conviction – to advance a business landscape in Asia that is resilient, sustainable, and united.

Undoubtedly, the 2021 edition of the ACES Awards holds an exceptionally noteworthy connotation. In the face of COVID-19, businesses were thrusted into unchartered territories as they raced to pivot to new operating models and reorient their strategies to achieve elusive short-term survival and long-term resilience without a blueprint.

To that end, the 2021 ACES Awards saw both small and large corporations that have not only emerged triumphant over the implications of the virus, but have also prevailed in going above and beyond in attesting their adaptability while remaining devoted to their sustainability goals towards forging positive impacts for the economy, people, and the environment.

In regards to eminent business leaders of the 2021 ACES Awards, Chief Executive Officer of Binh Tien Consumer Goods Manufacturing Limited Company or Biti of Vietnam, Ms. Vuu Le Quyen, has been regarded amongst Outstanding Leaders in Asia for her servant leadership style and passion for serving people and the community.

The 2021 ACES Awards has also recognised Hachi Yin, the Chief Executive Officer of Phuket’s largest real estate developer Utopia Corporation Co.,Ltd as one of Asia’s Most Admirable Young Leaders for his tenacity and entrepreneurial spirit that has enabled him to overcome multiple obstacles and accomplished major successes for the company.

Similarly, Gordon Lam, the President of Syniti Asia Pacific and Japan (APJ), has been acknowledged amongst Asia’s Most Inspiring Executives for spearheading the enterprise software company during the height of the COVID-19 pandemic in 2020 and achieved the impossible. He later grew the business threefold within the same year.

As one of Asia’s Most Admirable Young Leaders, Mr. Trần Hùng Huy, the Chairman of Asia Commercial Bank, has been more than inspiring. Despite some legacy issues, Mr. Trần had managed to restructure the financial institution to its glory through his decisive leadership and a sustainable vision.

Needing no introduction, R.E. Lee International’s Group CEO and Hong Kong-based billionaire Calvin Lo has received the Outstanding Leaders in Asia award for growing the family-owned life insurance brokerage into becoming the world’s largest and most successful of its kind. He constantly stops at nothing to come to the aid of others with an earnestness for his business that transcends beyond profit in order to instigate positive change in the lives of others.

ACES Awards’ highly coveted Entrepreneur of the Year award was bestowed to none other than YBhg. Tan Sri Dato‘ (Dr.) Rozali Ismail, the Executive Chairman of Puncak Niaga Holdings Berhad (PNHB), a Malaysian investment holding conglomerate with a diverse portfolio of subsidiaries. Besides amassing various accolades and successes both locally in Malaysia and on the global front, PNHB has continued to create sustainable value for its stakeholders and stayed on course in achieving its strategic objectives despite the pandemic under his helm.

Clinching the title of Asia’s Most Promising SMEs is TOGL Technology Sdn. Bhd, a Malaysian IT company that has leveraged on the strength of its technological innovations to achieve growth and development despite the COVID-19 pandemic, and its outstanding achievements thus far has positioned the company as one of the top SMEs to note moving forward.

Healthcare giant Johnson & Johnson Pte Ltd was designated the Top Workplaces in Asia title for its ambitious goals to deliver greater benefits for people, communities, and the planet. J&J also forefronts the welfare of its employees with industry-leading benefits and programs that are truly human centered.

From a sustainability standpoint, the purpose-led and performance-driven Royal DSM Singapore secured its standing as Asia’s Most Sustainable Company of the Year as a global leader in sustainability in recognition of its innovative science-based solutions that make the world a brighter place, creating long-lasting value for customers, shareholders, and the society at large.

There were also corporations that have been lauded for their persistent efforts in both outstanding leadership and sustainability for this year’s ACES Awards. Amongst them is Elmar Lutter, the President and CEO of Lufthansa Technik Philippines, Inc., who was conferred the Outstanding Leaders in Asia award and Lufthansa Technik Philippines which received the Top Workplaces in Asia award. The country’s top provider of maintenance, repair and overhaul (MRO) services triumphed despite the repercussions of the COVID-19 pandemic on the aviation industry.

Echoing similar sentiments is Equinix Asia-Pacific and Hong Kong, helmed by its President Jeremy Deutsch. Under his leadership, the digital infrastructure company has earned Asia’s Green Company of the Year for its pledge to protect the planet and its people through clean energy for the digital world, which is a true testament to its environmental excellence. Jeremy himself was recognized as one of the recipients of the Asia’s Most Inspiring Executives award.

Another corporation securing 2 awards this year is Taiwan’s petrochemical company CPC Corporation, Taiwan and its Acting Chairman and President Shun-Chin Lee, rightfully bagging the Top Sustainability Advocates in Asia awards and Outstanding Leaders in Asia awards respectively, as a homage to its admirable sustainable operations through continuous investments in R&D and innovation.

The eight edition of ACES, which saw a total of 420 nominees and 154 finalists from across the region, was once again held virtually due to the ongoing COVID-19 pandemic. Despite not having been able to convene for the awards in person, the virtual ACES ceremony went on splendidly.

While the red-carpet soiree had to be given a pass this year, MORS Group has several pop-up events under its sleeve to bring winners and nominees across individual countries together for smaller pocket affairs, enabling little clusters of distinguished business leaders to learn from and network with one another.

The ACES Awards is the brainchild of MORS Group. MORS Group’s mission is to assist companies, corporate leaders, and eminent industrialists to share a platform to exhibit leadership & sustainability excellence, to learn from market experts across the world, to engage stakeholders and employees in valuable ways, and to embrace a culture of progressive learning. MORS Group was founded in 2012 and is managed by a board of directors from diverse backgrounds, who facilitate and play a role in promoting Asia’s sustainable growth.

The full list of the winners and their profiles are available on https://www.acesawards.com/aces-circle/

For more info on the ACES, go to: https://www.acesawards.com/