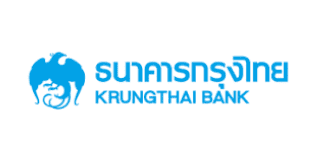 “Growing Together with Sustainability“

Standing with the people through hardship and prosperity

One of Thailand’s largest financial institutions, Krungthai Bank, is a listed state-owned commercial bank, which was established in 1966, and provides commercial banking services. Its network of 1,210 branches in the country makes it the Thai bank with the largest number of domestic branches, earning it the moniker “the Convenience Bank”. It is also recognised as the financial institution for development, as it helps create opportunities for people to gain access to sources of funds as well as provide them with financial literacy.

The bank’s strength lies in the sheer number of people it serves. In a country with a population of 70 million, Krungthai counts more than 40 million people as its customer base. This large base is owing to the many projects that the bank participates in, laying a strong foundation of financial infrastructure. These projects fall under five ecosystems – Government, Health and Wellness, Education, Mass Transit and Payment.

One crucial project is the development and distribution of the Government Welfare Card. In 2018, this was provided to about 11.6 million low-income earners and later included another 3 million people who were disabled, elderly, bed-ridden and those unable to travel. The card was also distributed in 2019 to reduce cost of living and transportation costs for more than 14.6 million low-income earners.

Other projects have included: the Civil Servant Medical Benefit Scheme, where reimbursement of medical expenses to 4.7 million government employees and their families were carried out through the bank with the installation of more than 5,600 electronic data capture (EDC) machines in state hospitals and about 1,300 machines in private hospitals; the Student Loan Fund, which the bank has been managing since 1996, granting loans to more than 5.6 million students; and the Mangmoom Card, issued for travellers on Thailand’s Mass Rapid Transit (MRT) lines.

By leveraging the strength of the government and the bank’s provincial customer base in fulfilling customer needs in the five ecosystems, Krungthai believes it plays a key role in driving up the standards and performance of commercial banks in Thailand.

As a government vehicle, Krungthai Bank was instrumental in dispersing financial assistance during the COVID-19 pandemic. It was the key enabler of the government’s economic stimulus measures that included: a monthly 5,000 baht cash handout for three months to 15.3 million temporary, contract and self-employed workers; the half-half co-payment scheme, where the government encourages consumer spending by paying for half of the food, drink and general goods purchases of up to 150 baht per person per day, capped at 3,000 baht per person; and the We Travel Together package to encourage domestic tourism through subsidies.

Krungthai Bank was able to seamlessly deliver financial assistance thanks to new products that it developed quickly in response to the pandemic. The Pao Tang e-wallet enables Thai consumers to access financial services and stimulus measures without having to open a bank account. Delivering assistance straight to the people with transparency and accountability, it has become Thailand’s largest digital platform, serving over 30 million users.

The bank also introduced its 2-Banking Model strategy in 2020, termed the Carrier and Speedboat, as a way of managing new challenges, such as economic fluctuations, technological advancements and dramatic changes in consumer behaviour. Working in tandem, the Carrier model focuses on safeguarding the bank’s core business, while the Speedboat model seeks new business opportunities though innovations and technologies. Collectively, the 2-Banking Model ensures the most efficient resource allocation and successful business performance.

Thanks to forward-thinking measures such as these, Krungthai Bank has a reported an increase in its customer base, with 1.2 million new entrepreneurs opening accounts with the bank, and some 100 billion baht in circulation.

“ Krungthai Bank is the people’s bank. With innovative tools at its disposable, the listed state-owned commercial bank is constantly evolving to live up to its role to ensure the Thai economy achieves a higher growth and the Thai people enjoy a better quality of life.”